As most Mac users probably know, the keyboard command to cycle between applications is ⌘-tab (command-tab). This application switcher is one of the better things that Apple has ‘borrowed’ from Windows over the years{{1}}. However, unlike on Windows, where the equivalent command will cycle through every single window, on the Mac it cycles through applications. To cycle through application windows we need to use another command, namely ⌘-` (command-backtick). As you can see from the image below, this is a handy alternative since the backtick key is immediately above the tab key and only requires a small movement of your finger:

[[1]]To be precise, Apple ‘borrowed’ this from a Mac extension developer, who in turn had copied many aspects of the Windows implementation. , but when Apple released their version it was extensively criticised for being too similar. Edit: The extension was Liteswitch X, although John Gruber’s contemporary version of events suggests that my memory may be slightly patchy.[[1]]

The problem is that for us British Mac users our keyboard is … well … somewhat different. Not only do we have more symbols and fewer words, our backtick key has been moved:

As you can see Apple have replaced the backtick key with the – to be frank – utterly useless §/± key. I have never knowingly pressed this key. In order to put this esoteric key there, Apple have shrunk the often-used left shift key and shoehorned the backtick key between it and the Z key. The problem is that in order to press the ⌘-` key combination you now have to put your hand through some uncomfortable contortions.

For years I have simply accepted this{{2}}, until finally my brain decided to begin working and suggested remapping the key combination. To accomplish this you can simply open the Keyboard System Preference panel, click on ‘Keyboard Shortcuts’ and change the highlighted command as shown below: 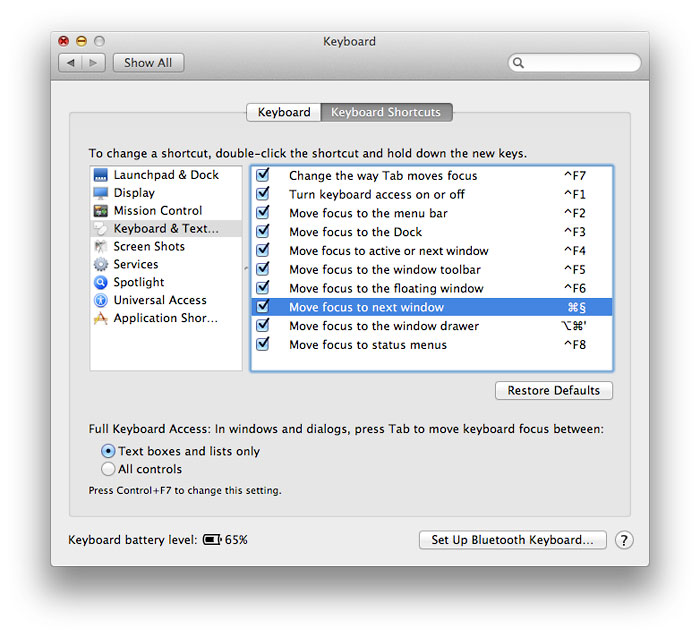 And there you have it – comfortable switching of application windows.

Edit: Unfortunately it doesn’t seem to be possible to remap the same ⌘-` key combination that cycles backwards through the application switcher. Any suggestions gratefully received!