Using OS X to convert video with surround sound for the Xbox 360, and related notes

You are here:
August 14, 2012Leave a commentDigital home, Video

I am a long-time AppleTV user. I have children, so ripping my DVDs and putting them on a hard drive attached to my jailbroken AppleTV is a convenient way to let the kids watch their favourite TV shows and movies. Unfortunately the AppleTV stopped working recently.

However I do have an Xbox 360. And since the Winter 2011 update, Microsoft’s Xbox 360 console has been capable of utilising external USB devices for media storage. This ability to connect a large multi-terabyte drive suddenly makes the console a passable media player, with the huge benefit that many people already own one.

In my opinion the whole point of a media player is to play video from a standalone box. As a result this ignores any method of streaming video to an Xbox from a PC or Mac.

There’s aren’t too many options when it comes to formatting your external USB hard drive for use with the Xbox.

OS X users can simply use Disk Utility to format their hard drive. The Xbox supports both APM (Apple Partition Map) and MBR (Master Boot Record) partitions. It does not support GUID partitions.

This is the basic Xbox 360 format. If you own the 4GB Xbox and wish to use a 16GB potion of your external drive to extend your Xbox’s system storage then you must use FAT32. The major drawback with FAT32 is that it does not support files larger than 4GB, however this doesn’t matter too much as the Xbox itself is limited to 4GB file sizes regardless of format.

For reasons known only to themselves Microsoft do not support NTFS on the Xbox 360.

You might be wondering why Microsoft supports Apple’s HFS+ filesystem when it doesn’t even support its own NTFS. I have one word for you: iPod. The Xbox needs to support HFS+ to allow people to play iPod content on it.

The Xbox will play videos in the following formats:

Popular formats that the Xbox should be able to play, but cannot

The Xbox officially only supports 720p HD video from USB devices. In a what appears to be a clear marketing ploy 1080p video is limited to content you rent from the Xbox’s Zune Marketplace (thanks for that, Microsoft). I have personally tested 720p video with Dolby Digital surround sound in AVI format with satisfactory results. However the file sizes are 50-100% larger than they would be when compared to a video of similar quality encoded in H264.

There are two ways to play surround sound directly from your Xbox 360.

To transmit surround sound from your Xbox you will need to use an optical cable to connect it to your AV receiver.

Due to the extremely limited (non-existent?) options for encoding WMA HD on OS X I am only really interested in AVI files.

After a lot of experimentation I’ve concluded that the easiest way to create Xbox-compliant AVI files is to use Handbrake 0.9.3 (later versions of Handbrake removed the AVI-creation option). Download it here. In my case I was moving my content from an AppleTV, so I had a lot of M4V movies containing H264 video and AC3 surround sound which I wanted to play on the xbox. Handbrake 0.9.3 is the perfect tool to convert these.

For the video portion simply choose AVI as the output format, MPEG-4 (ffmpeg) as the Video Codec: 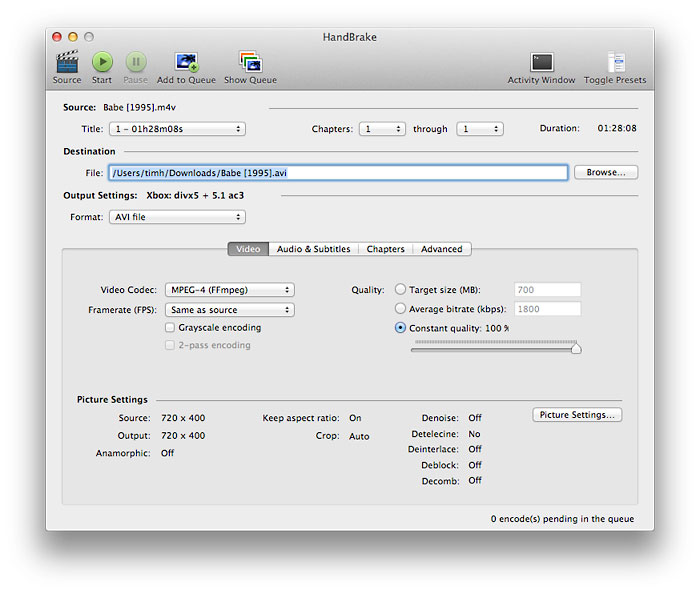 For the audio portion choose the AC3 source (if your source video is Handbrake-encoded AppleTV M4V files this will be the 2nd audio track), and then choose ‘AC3 passthru’ as the audio codec: 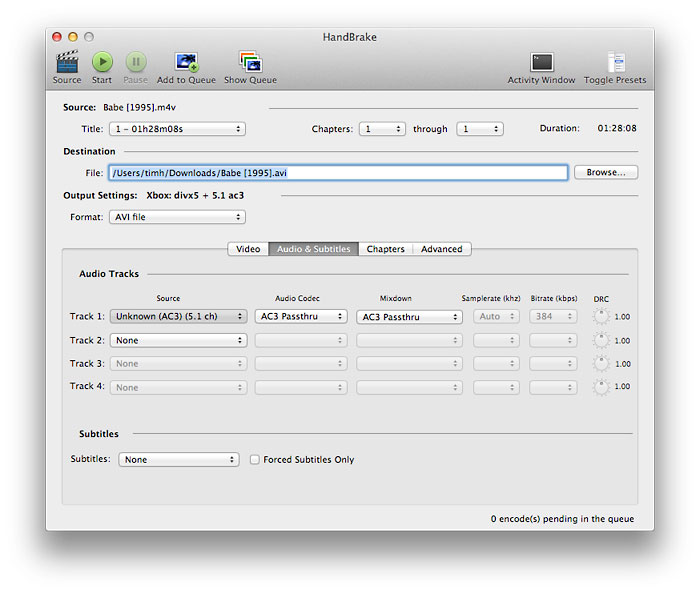 On a Core i7 iMac converting a 90 minute SD movie using these settings take about 5 minutes.

So that’s it. AppleTV library into an Xbox-friendly format, while retaining surround sound. The Xbox 360 makes a decent media player. It has some limitations, in particular with regard to 1080p content and the 4Gb file size limit, but on the whole it works well. I am also a LoveFilm subscriber and LoveFilm have a good Xbox app, and the BBC have an excellent iPlayer app for Xbox, so having all of our movies and TV shows accessible via one controller is convenient.