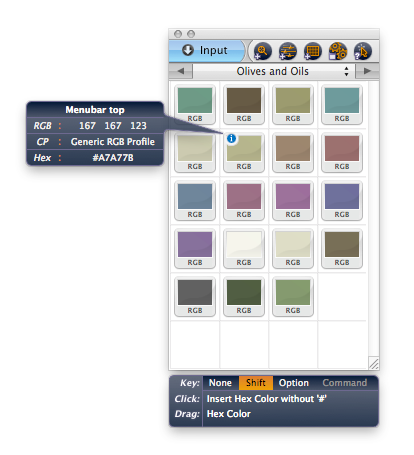 Tangerine (not to be confused with Tangerine!) is a colour palette manager which resides in your OS X menubar. It allows you to use an eye-dropper to pick colours from anywhere on your screen, and save them in user-defined palettes. The ability to save sets of colours together is a great benefit when working on a design project. I realise that OS X’s own Color Picker also allows you to save and re-use colours, but in my opinion the user interface leaves something to be desired, especially with regard to displaying the palette and applying colours to apps like Photoshop.

I’ve used Tangerine for years, but unfortunately development of the app seems to have stopped in 2009. The most recent version 1.2 of Tangerine is only officially compatible with OS X 10.5. Using it on OS X 10.6 or 10.7 results in the app quietly shutting down after a few minutes. Until now I have simply been re-launching it as needed.

Given than the app appears to be abandoned and unlikely to be updated by the developer, I recently set about trying to make it automatically re-launch itself whenever it quits. Enter launchd. One of launchd’s abilities is that it can re-launch apps that have crashed. And it’s built into OS X. Just what we need!

To take advantage of launchd, this is the plist you’ll need to create and put inside your ~/Library/LaunchAgents folder. Use any text editor to create it. Mine is named com.timh.TangerineWatcher.plist – remember to replace timh with your own OS X user name, in both the name of the file, and also the highlighted section on line 6.

And that’s all there is to it. When Tangerine silently shuts itself down it should now instantly relaunch itself.

Note: Lingon is an app specifically for working with launchd, although to be frank it seems like overkill for our trivial purposes. There are currently two Mac App Store versions – version 2 which costs £2.99, and version 3 which costs £1.99. Reading the reviews version 2 is apparently the one to get. The author explains the necessity of two separate versions here. For the frugal amongst us there is also a two-year-old open source version, although it may be somewhat less user-friendly and is likely missing some of the later versions’ features.